It's always a treat to find a new book by Edward Willett. He's a Canadian writer who can be relied on to put narrative -- story, if you prefer -- before anything else in his books, whether fantasy, or science fiction, or even the nonfiction writing he's done. As a friend of Edward Willett's, I'm pleased to be able to participate in his promotional blog tour this October. I've been a fan of his work since before Andy Nebula: Interstellar Rock Star was first released! 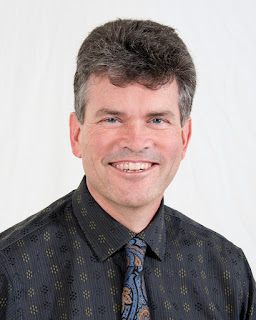 Willett's newest fantasy is Flames of Nevyana, from Rebelight Publishing. Though many YA fantasies are coming-of-age novels, this one is different in that perhaps its time not only for the young protagonists to take on active, responsible roles, but for their communities at large to leave behind old behaviours and interactions. Click here for a link to this book's listing in the publisher's online catalog.
In a few images, Willett presents the differing communities of his protagonists, making these young people and their surroundings distinct and memorable.

One very young woman lives in a community like gypsies or Travelers:


Amlinn might have been imagining it, but it seemed to her that the gathering twilight darkened at the same instant that Samarrind touched the rod to the sigil of the Keystone.
With a crackle, the Fence sprang instantly to life and a wall of glowing blue light surrounded the Freefolk camp. The hair on Amlinn’s head and arms stirred as though alive, and a sharp smell assaulted her nostrils. Some Freefolk claimed to hate it, but she loved that smell. It meant the Fence was working. It meant the Nightdwellers couldn’t get in.
It meant tonight, no children would lose their parents to the monsters of the forest as Amlinn had when she was four.


There's a different barrier, but of a similar magical kind, surrounding the temple Petra is patrolling:


Occasionally, the gloom was lit by distant lightning-like flashes of blue from atop the dark bulk of the Temple. All around City Primaxis, magical Hearths took in that Blue Fire and turned it into the light and heat Petra was currently in such desperately short supply of.
As he and Cort passed each other at the gate, the rain redoubled its efforts to drown them. Even through the tin-roof patter of the drops on his steel helmet, Petra heard the Curtain hiss like a giant teakettle. Vast clouds of blue-tinged steam rose from it into the night.
The icy water poured over Petra’s helmet and down his neck. Useless and sodden, his blue woolen cloak hung heavy as lead from his mail-clad shoulders. His boots squelched with every step. His damp leather trousers chafed his thighs. He couldn’t even feel his fingers: they’d gone numb inside his soaked gloves eleven circuits ago.


And when Jin dares to stand outside his warren for a few moments at sunrise, one of the other boys tells him:


“I thought your head was on fire.”
Jin laughed. “My fur wasn’t even singed.”
The truth was, in the last thirty seconds he had stood under the brilliant glare of the sun filled with both pride and terror, he had felt something—but not the agony Scrollkeepers swore would befall any Nightdweller touched by the unholy rays of Arrica’s sun.
No. All he’d felt had been warmth.
A pleasant touch of warmth.


Anyone who can write with such immediacy about light, rain, and mystic discipline has my attention! If this book is the first in a series, I'm up for reading any book with the same subtitle: A Voltpunk Novel. There are steampunk elements in many kinds of science fiction, but Willett is ringing his own changes on the charm and appeal of the technology of electricity as it is introduced to people of differing cultures. 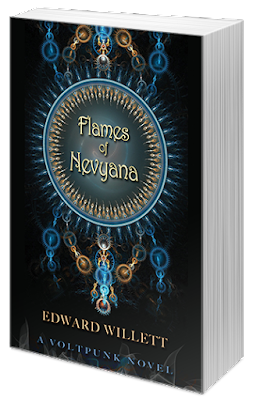 I've read this book only in e-format, not in print format, but I've got to say how much the cover art pleased me. A lot of books available as e-books have "cover art" that doesn't work for me, either as art or as the cover of a book. There is considerable tradition about how to present information on a book cover, and what to expect from the art elements -- and I am impressed with the design choices for this book cover. Clear lettering for the author's name is a good choice, and imaginative serifs on the lettering for the title told me to expect a fantasy element even in a story subtitled: A Voltpunk Novel.  The interlocking gears of the art reminds me of how technology can seem magical, and how magic is intended to fit together effectively. 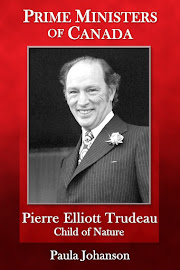